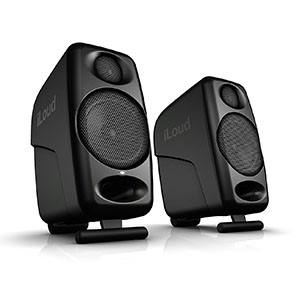 IK Multimedia may not be either a household name or the most catchy brand name you’ve come across, but they have been going since 1996. Founded in Modena, Italy by a pair of engineers, their primary focus is professional applications.

With a couple of exceptions, the first thing you will notice about the iLoud Micro Monitors is that they look fairly radically different from the majority of studio monitors on offer. Depending on your experience with audio equipment, this will likely provoke one of two responses. Either you’ll love that they have eschewed the standard design trend in favor of something a little more up to date, or you’ll immediately jump to the conclusion that they are sacrificing performance to appeal to a broader market share.

As with many things in life, the truth lies somewhere between these two extreme responses. We are advocating, if you will, for a kind of studio monitor centrism. A cautious, considered middle ground response. The speakers are, as the name implies, on the small side. Weighing in at just 1.7kg, these are also eminently portable. With this size comes certain expectations about the kind of power (or lack thereof) which they’ll be able to output, but we’ll get to that later.

An EQ switch on the back of the speakers allows you to toggle the bass and treble responses between the default (flat) and a setting that is designed specifically for operation within a small studio (like your bedroom). This prominence of this feature, which primarily addresses the problems caused by having speakers near a wall, tells you a lot about the focus of the iLoud Micro Monitors: they are designed around the needs of a bedroom producer who may also need the extra portability that the small size affords.
As well this first EQ switch, two more are provided which offer attenuation of the high and low frequency responses between flat and -3dB. All in all, this level of control is refreshing from a pair of speakers which look ostensibly like they would be thoroughly lacking on options.

Inputs include all the usual suspects: RCA jacks, a ⅛” input. Nothing too exciting. Except that you also have Bluetooth connectivity meaning that you can theoretically monitor two analog inputs and a wireless source at the same time. This provides a good deal of flexibility we were not expecting, and comes as a nice bonus.

Despite their small stature, the iLoud Micro Monitors can produce up to 107 dB of sound which isn’t half bad. It isn’t going to change your life, but it’ll certainly outperform expectations. There is some distortion when you get right up, and clipping is noted by a red LED on the left speaker. But, as studio monitors, these aren’t really designed to just blast your tunes, and the proof of the pudding is worth considering more in terms of clarity and accuracy than the raw volume potential.

On the whole, the performance of these speakers vastly outweighs that of just about any pair of desktop or bookshelf speakers which you could compare them to in this (or even a higher) price range. The sound is far more detailed than you might expect, and the bass response in particular came as a total surprise given the form factor.

A perfect example of why you shouldn’t judge a book by its cover, these speakers may look like they’re aimed at the less serious consumer, but deliver a whole lot of quality in their audio performance. A pleasant surprise indeed.