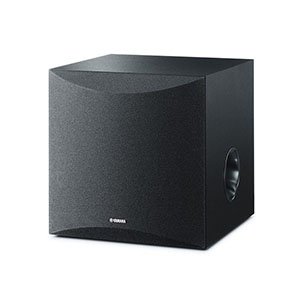 Yamaha certainly has a lot of authority in the world of speakers. Unsurprisingly, their lowest-end subwoofer proves to be more than the sum of it’s parts, lacking in most features, but still producing monstrous sound under $200.

Yamaha immediately sets themselves apart from the pack with the look of the HS-SW050. The subwoofer is flat black, with a curved cloth grill that is beveled at the top and bottom. The Twisted Flare Port (more on that later) on the side adds a little flair to the box, but the overall aesthetic is mostly understated, but never boring. The back of the subwoofer is as clean as they come, featuring only an input, volume knob, power switch, and attached power cable.

Overall, Yamaha really did a fantastic job in the look of this one. The subwoofer strikes an incredible balance between minimalism and flair. While the black box falls in-line with a “stock” subwoofer look, the curved front side maintains a look that belongs all to Yamaha. PErsonally, I love the look of the HS-SW050. Unlike more expensive models in the range, a lack of controls on the front panel make this subwoofer disappear into a room, while still being able to appreciate it if you want to.

At first glance, the Yamaha HS-SW050 looks like a desolate place in terms of features. Lack of auto signal sensing, tunable crossover, and subharmonic enhancement look like a deal killer in context of other subwoofers. However, Yamaha put the features were it counts, in the sound. The first part of this equation is the Advanced YST II, where the speaker and amplifier work together to cancel out impedance so the speaker has perfectly linear motion. The next is in the Twisted Flare Port on the side of the cabinet that allows sound pressure to come out of the port smoothly as opposed to a straight blast of air, reducing extraneous noise.

These two key features make the HS-SW050 sound fantastic, but the feature set is still lacking. While no necessary, auto signal sensing and tunable crossover would be nice to see at this price point. These don’t break the subwoofer overall, but the lack of them is missed just a little.

Still, the proof is in the sound and this subwoofer is not lacking in that department. The Twisted Flare Port is more than just marketing hype, taking sub blasts with ease, even at high volumes. The low-end sounds much more tight, consistent, and clean and that’s due to this ported design.

Additionally, the Advanced YST II is fantastic, reducing the strain of high sound pressure levels on the woofer and making the sound much cleaner at high volumes.

Overall, the HS-SW050 sound monstrous in every sense of the word. Low-end is full, tight, and consistent in a way that is next to impossible to rival at this price point.

The Yamaha HS-SW0500 is a fantastic subwoofer at an even more fantastic price. A lack of features holds this subwoofer is disappointing, but easily made up for with the Twisted Flare Port and Advanced YST II.